Science and Research Data and Reports

The facts and figures behind our mission.

State of the Estuary Report 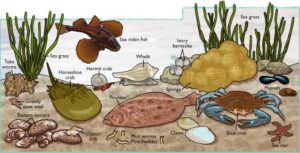 Deep under-water, the Delaware Estuary is teaming with life in a ‘hidden’ world at the bottom of the river and bay. Plants and animals make up benthic communities, containing oysters, grasses, worms, sponges, and many tiny animals living inside the mud. These creatures form important food webs, provide homes and shelter, and nursery grounds for fish. The benthos also has an important role regulating in water quality, sediment quality, and protecting shorelines from waves and erosion.

In 2005, the benthic habitat of the Delaware Estuary was identified as a key priority needing to be studied. This lead to an effort called the Delaware Estuary Benthic Inventory (DEBI), a partnership between 10 academic, federal, nonprofit, and state institutions. DEBI was launched in 2007, with field work conducted between 2008-2009.

Scientists sampled more than 230 locations across 91 river miles between the mouth of Delaware Bay and Philadelphia. A whole range of data were collected for sediment, water quality, fauna, metals, and hard bottom data. Data from DEBI can be downloaded from the ‘Data & Reports’ tab.

The objective of the DEBI was to catalog and describe the living species in the benthic ecosystem of the tidal Delaware River and Bay. This estuarine survey was initiated in July of 2008 using the research vessel Lear, which is owned and operated by the EPA’s Region 3 Office. Over a two-month period, scientists sampled more than 230 locations across 91 river miles between the mouth of Delaware Bay and Philadelphia. Most locations had a soft bottom and were sampled using a device called a bottom grab. Other locations required a new approach.

IMPORTANT:
The PDE and STAC-affiliated DEBI workgroup are providing these publicly funded data for general use and interpretation by others.  PDE and our partners in the DEBI program are not responsible for any changes that are made to the dataset once it is downloaded from the PDE website, and this applies to any subsequent analyses or interpretations of data made by others.

Products of the Delaware Estuary Benthic Inventory (DEBI) should be referenced as noted in the metadata for each sepecific data set.  The DEBI effort was multidisciplinary and many federal, state and regional partners contributed with design, sampling, sample analysis and data analysis products.  The Partnership for the Delaware Estuary (PDE), a National Estuary Program, was the coordinating entity and grantee, working closely with EPA Region 3 and the EPA Atlantic Ecology Division.